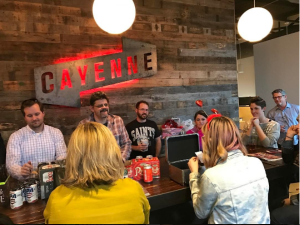 Reading from the FITB Box

We recently were recognized by the Birmingham Business Journal as one of the best places to work for in Birmingham. Rather than talk about the award itself, I’ve been asked by our staff PR whiz kid, Dana McGough, to write about our company culture.

Which I really dislike doing.

To me, talking about your culture is akin to a used-car salesman pointing out how honest he is, or someone bragging about how cool they are. The very act of drawing attention to it often denies its possibility. Dana reminded me of an old riddle. Riddler: “What is lost the second you utter its name?” Riddlee: “Silence.” It’s not to say our workplace isn’t a point of pride; it is. Here at Cayenne, we enjoy coming to work where we feel comfortable, where the “culture” (man, I hate even typing that word!) matches our sensibilities and the way we like to work. So, maybe if I talk more about how culture happens (using some Cayenne examples) and less about this sort of high-falootin’ concept of “culture,” I won’t come across too much like a carny barker.

Culture happens. That’s absolutely the right word. It happens. It’s organic. It evolves out of the setting and environment you and your team create. You can’t manufacture culture. I think of it in the same way I think about playing golf – the more you analyze it, the worse it gets. I’m always irked by companies that attempt to manufacture their culture, because I think that, deep down, it’s fake. It’s managerial eyewash. You don’t make culture; it happens because you let it… you make room for it to happen. I think of the things that make our workplace special. Each of them has occurred of its own accord because we got out of the way and let it be. Here are a few of those things: 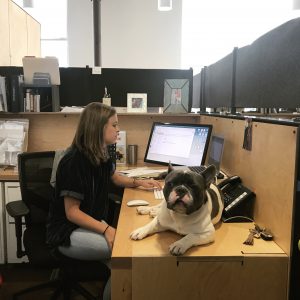 This is not a paperweight. This is Bacon.

Dogs in the office. This may be the most in-your-face aspect of working at Cayenne. We allow dogs. So long as they don’t fight and they take care of business in the great outdoors, we’re fine with their being here. Why? Because many of us have dogs and we love them. Having them here throughout the day is good for the soul. When you see the ever-peaceful (if somewhat Eeyore-like) chocolate Lab, Lola, you can’t help but smile. Then there’s weird little Dont’a Hightower with his chihuahua genetics, his errant front tooth that sticks out like a veiled chihuahua threat, and his irrational trepidation towards me (and only me, by the way). There’s Bacon, the French Bulldog whose snorts warn of his muscle-bound approach, Violet, the occasional visiting, diminutive Boston Terrier (who has a crush on Dont’a, by the way), Gracie, the wily beagle mix, and Duke, and Mavis, and Ruby, and Buzz and Cili, and I’ve probably left one or two out. My own dear Jack spent many a day here, and almost passed on to that great beyond where the best dogs go, right here at Cayenne. But here’s the deal: dogs didn’t happen at Cayenne because we asked for people to bring them. They happened because we got out of the way and let them happen. 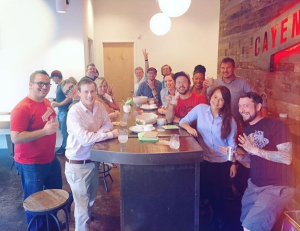 The Bar. We have a bar in the lobby. Depending on whether one of the dogs meets you at the door, the bar may be the more in-your-face aspect of Cayenne when you visit. The bar happened because we didn’t need a receptionist and the lobby area was otherwise useless. It turned out that James Lewis, the brilliant chef behind Bettola, which is next door to us, was removing a bar from his restaurant. We repurposed that sucker. Add to that the exceedingly cool shuffleboard table that my friend, Nathan Marcus, loaned us (his wife banished it from chez Marcus), and you’ve got a really nice gathering place. Now it’s the place where we gather on Friday afternoons to share “culture moment.” And it only happened because we let it happen.

Culture Moment. Yep, there’s that dadburned word again. It’s really more than a moment. But it started as a tiny piece of our Monday morning operations meetings (a moment) and we decided it deserved more space and time. So, we made it part of our Friday afternoons. At 4:30 on Fridays, we gather at the bar and share stories about our week. Successes. Great work (which we sometimes show on the big screen with clients and production partners on hand to celebrate). Personal victories. We also share the contents of the FITB Box. And we drink beer and play shuffleboard, (or cornhole outside when the weather cooperates). 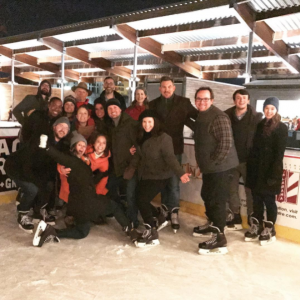 The FITB Box. This was the brainchild of our Creative Director, Andy Odum. We have a tiny little silver suitcase in which people deposit simple thank-yous. Sometimes, they’re as innocuous as, “Hey, Dana, thanks for the sandwich you saved my life.” Sometimes, they have more to say. Bottom line: they’re there for us to remember to say thank you for the small things. We could’ve told Andy, “no.” We could’ve said, “We don’t need no stinkin’ thank-you box!” Instead, we chose to get out of the way of a good idea.

These are just a few of the trappings of our work philosophy. In and of themselves, they mean nothing. Together, it all adds up to something you can’t quite put words around, but you know it when you see it. I suppose it’s what corporate pundits call “culture.”

When I tell stories about what it’s like working at Cayenne, people gravitate to them. We’ve all experienced (in one way or another) toxic work settings. (I’m reminded of the movie, Office Space, with its soul-suckingly miserable office setting.) I think people just wish that – since we spend more time at work than we do at home – we could just work in a place that makes us feel comfortable, cared for, and safe. That’s why they have these awards for great places to work. It’s certainly nice to receive one, but the award pales in comparison to the reward of having a place where everyone feels empowered and loved. And in the end, that’s what “culture” is all about.