Google+: One More Tool in Your Social Toolbox 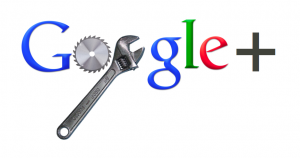 For starters, get your head around the fact that all of these social networking sites are tools. They may be tools for your social life – meaning: how you connect with your friends, how you invite them to parties, how you stay in touch with what’s happening in your social element. [Facebook rocks here.] They may be tools for your business: how you share interesting insights about your line of work, how you invite colleagues and clients to participate in your thought processes, how you deliver unique content you think will be of some value to  business associates. [FB, Twitter, LinkedIn are all good in different ways here.] Social tools might be how you keep in touch with family, how you reconnect with old friends, or how you keep up with what’s on the menu at your neighborhood restaurant (Silvertron Cafe Soup and Sandwich combo (Mon-Fri 11am-2pm) chilled Mexican tomato-cilantro soup w/ ciabatta bread with bbq pork & cole slaw)[right out of Facebook]. ]

But still, these are tools – networking tools. And tools are only as good as the person using them.

I’m fairly handy with a ratchet, but put me behind a skill saw and it becomes an unskilled saw.

Now that we’ve established the basic toolness of these social platforms, let’s talk about the newest tool in the box. By now, I imagine you’ve heard of Google + (Google Plus). After all, the pundits have  been working overtime. As one of my good friends pointed out: “I haven’t had a chance to even look at this [Google +].[ I’ve been] Too busy reading all the reviews, critiques, and “how to’s” to even take a look at it.” As of July 10, some folks estimated there were about 5-million users [1]. So what in the name of all that’s digital is Google +?

One way to think of Google + is to think of it as Facebook with filters. G+ is driven by information (what would you expect from Google?) rather than relationships. With G+,  you are able to organize all of your “friends” in terms of who you choose both to receive information from, and share information with, by putting them into what Google calls circles. Furthermore, you can dump pretty much anybody you come into contact within G+ into a circle. For example, if you come across, let’s say, Steve Jobs in G+ and want to keep track of what he posts, you can put him in one of your circles.

It’s about who you want to read and who wants to read you. The circles represent a way of categorizing who you want to hear from and with whom you want to communicate. For example, should you decide to share something with your “friends,” you can choose which “circle” you want to share it with. By choosing the circles you share your entries with, you are able to subject only people you designate to specific content. For example, you might read this blog entry and decide to subject only friends in a circle you’ve created called “People I Don’t Really Know, but Whose Opinions I Value, and Who I Therefore Want to Impress.” Family pictures can be shared with “Family.”  Insights at work might be shared with “Colleagues” or “Clients.” You discover the cure to cancer? Put it out there in the stream, buddy. But know this, like Twitter and unlike Facebook, when you put it out there in the stream – it’s out there for everybody to see.

Likewise, you can find people to follow and add them to your circles. Hear the tweet of something familiar there? The only difference here between G+ and Twitter is you don’t have to contend with a 140-character limit. I found Seth Godin out there. I’m following him to see if he delivers any insights via G+. And I’m thankful he doesn’t have to offer it up in 140-character morsels. Of course it’s moot. I haven’t seen anything from him yet.

It has bells and whistles. For the most part, G+ does everything else Facebook does. There’s a place for pictures, you can upload links, etc. Unlike Facebook or Twitter, you can also create what’s called a Hangout – (think video conferencing that you can organize by circle – or you can just start one and see who shows up to talk). It also has a handy feature that allows you to mute some of those viral conversations that get so out of hand you become weary of hearing folks wax eloquently on the subject.

So, what kind of tool is G+? Where does it fit in your toolbox? I see it as an information delivery tool. In fact, I think it portends the end of Twitter. It does all Twitter does and more. Does it spell disaster for Facebook. Not a chance. Will it be successful? Maybe so. The uptake seems to be fairly robust… but the jury’s still out.

1. Google + is another tool – one launched out into the socialsphere by one of the most powerful companies on the planet.

4. Like any tool, it’s only marginally useful if you don’t know how to operate it.

5. Like any social Internet tool, its usefulness will be driven in large measure by how many people have adopted it.

Is it better? Maybe. Will it make life better? I haven’t a clue. I suppose it just depends on who uses it how.