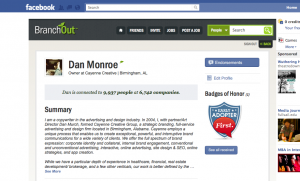 Hitherto more akin to being the online equivalent of a block party, Facebook has now made a foray into the territory of LinkedIn. When compared with Facebook, LinkedIn is a a bit like a virtual Rotary Club meeting. It has the reputation for being the “serious” networking site, for it is there that you join groups devoted to best business practices of all types; it is there you network by asking people you know to introduce you to people you don’t; it is there your profile pic features you in your Sunday-go-to-meetin’ clothes versus the avatar you selected for your Facebook profile pic.

Branch Out is like what would happen if Dr. Frankenstein added building a social networking site to his bucket list.

Enter Facebook’s Branch Out. This odd add-on is hard to get your head around. It feels more like a job-search site than a networking site, though it claims to be both. But, then it brings in those strange e-social equivalents of “truth or dare,” where you compare one of your friends to another. “Who is more likely to end up with a terminal case of the hiccups? Phil? or Fergus?” “If you were cornered by a rabid marmoset, who would you call? Sandra? or Carla?”

I loathe these activities. I don’t take quizzes, don’t make lists of my favorite things, and generally approach all of these diversions with a curmudgeonly attitude. But then, I’ve never even wanted to play Farmville, or Mafia Wars, or any of the much-touted games in the FB franchise. Perhaps I’m not the target, but the “activities” I found on Branches Out seem just… insipid. You may have been hit up lately to visit the Watercooler Matchup . Same thing only worse. It’s all about the insipid activities with little or none of the networking stuff.

Somebody help me understand these activities. I mean, how long can you sit there and perform a simple ranking between two friends? And what the heck does that have to do with a site that purports to be about networking and jobs? So what’s a mensch to do?

Profile was easy: dump it in there from LinkedIn, make a few minor corrections and rock on. But then, the profile process took me through steps I seriously didn’t want to mess with: a form where I was to describe what kind of job I was looking for… but wait a minute… I never said I was looking for a job. Then I was supposed to ask friends to endorse me, ask friends to join, endorse friends. And the endorsements, which employ the Twitter 140-character formula, are anything but substantial. “#Pud is a great guy. I worked with him for a year at the sawmill and he still has seven of his fingers.” Geez. And to cap it off, Branch Out taunts you with one of those bar graphs that say, “You’ve only got 300 more activities to complete before your Branch Out happy-happy-joy-joy-profile is complete!” AND, you get rated by the site. Example: an hour of insipid intrusive activity (a profound sorry to all of my friends, whose walls I graced with an invitation to join) I became ranked as a Super Connector (bronze). I have no idea what that means. Oh, and you can earn badges like FourSquare. Seriously?

So, in the end, Branch Out is like some sort of Facelinkedfoursquitter monster. If Linkedin is the Rotary Club meeting, Branches Out is a bit like trying to network or get a job by walking right into the executive washroom wearing a rubber chicken on your head, playing a zither, and telling elephant jokes to the alphabets while they go about their business. My early prediction – Branch Out will wither and be pruned eventually from the Facebook offering – or change mightily. Meanwhile LinkedIn will remain the alpha dog when it comes to social networking for the buttoned up.