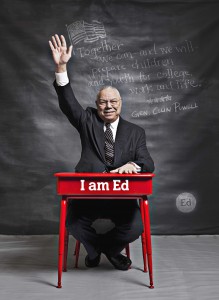 Coincidentally, we have the agency’s Pandora station set on a Bob Dylan mix as I re-read Joey Kennedy’s editorial on the Birmingham Educational Foundation (you can call it, Ed) [Joey Kennedy: Times they are a changin’ in Birmingham City Schools, 4.17.11]. First of all, in the interest of transparency, I’ll disclose that the Birmingham Education Foundation was the recipient of the FITB Initiative, Cayenne’s concentrated, annual not-for-profit effort, for 2011. [See The F.I.T.B. Initiative, 7.6.10] . In fact, that is where the discussion must begin.

When we vetted applications last August/September, we had more than 30 – all excellent causes. But the Birmingham Education Foundation won the day for a number of reasons, the sum of which pointed to a rare alignment of  heavenly, a.k.a. political, bodies. First of all:

When the team showed up to present their case in person, we were blown away by the evidence of commitment.

Mike Froning, Ed’s executive director brought with him Dr. Witherspoon, the new BCS Superintendent, Fred McCallum, President of AT&T and Chairman of Ed’s board, James Sutton, a Public Relations and Marketing Consultant, Adrienne Mitchell who works for the Birmingham Board of Education, and Anthony Williams, a website developer. This was an impressive and articulate group of people. They succinctly laid out their case: 1. Dr. Witherspoon has a track record of success. We are lucky to have him. He knows how to turn this system around. 2. The support for this effort runs deep in a number of communities – business leaders, church leaders, neighborhood leaders, the BBA, (this fits neatly into Blueprint Birmingham). We were told that the city leadership and the school board were on board. 3. We were shown the plans Ed has for turning around the school system. These are plans of substance. Plans with measurable goals that require transparency and candor, created by extremely intelligent people and designed truly to move the needle for our city schools. And these people were impassioned!  Which brings us to the main reason: they were all saying the same thing – “yes, but, this time it’s different.”

You see, they were acknowledging the great pall that we all felt hanging over this effort: we (and I mean US, Birmingham, all of us), have turned into cynics. We have all fallen into what Bunyan in Pilgrim’s Progress called the “slough of despond.” Birmingham has a dark love affair with cynicism – we secretly love to see things fail. And, when it comes to the Birmingham School System, we have convinced ourselves that our the schools are beyond hope, and worse, that the folks dependent on them couldn’t care less. I’ll be the first to admit, I was one of the cynics. I live in Birmingham and send my child to a private school. And what I knew of Birmingham’s City Schools was what little bit I had picked up in the headlines.

Well, Cayenne is here to testify that that the negative hype is simply not true. We have visited some of the hardest schools and what we encountered completely challenged our preconceptions. We met teachers who were very much on the ball. We saw students who were engaged, curious, and intense – students with dreams and hopes. (Quick sidebar: I pulled out of one of these, down north of Avondale, pulled out onto 41st heading back south and looked up to The Mountain, where I could clearly see the water tower just up from Altamont School. I had to pull over for a moment. The disparity was intense. I felt a deep and resounding sense that those of us who can, not only are able to change the status quo, but must).

Now, for your consideration, a few other points: consider first that Ed actually began a few years ago with more than a hundred meetings of more than a thousand parents and grandparents, aunts and uncles scattered all over the city. The effort was called Yes, We Can! and what issued forth from it was a resounding and frustrated call for help, a unified sense that these people, all of whom cared very deeply about their children,  grandchildren, nieces and nephews, believed that they should and could have a great school system, and more importantly, that they WANTED a great school system. They just didn’t know how to get there from here.

Second, consider that the Birmingham School System is vital to all of us. If it fails, we fail to raise Birmingham’s future leaders, thinkers and workers. And, while it might be a comforting notion that the city of Birmingham could fall completely off the face of the Earth and the communities to its north and south would continue to thrive, that isn’t true. Businesses that relocate to Birmingham, relocate to Birmingham, not to one of the comfortable communities that surround it. Want a lesson? Take a good long look at Detroit.

Last, but far and away the most important: we’re talking about our children. Yes, OUR children. These are bright young kids who have every right to pursue their dreams, their goals, their happiness. It’s incumbent upon all of us to help them get there. The very least we can do is provide them with a solid education.

So, down the road, if Ed asks you to help. Think twice before you slip into the Slough of Despond. Raise your hand. Acknowledge that you have at least part of the answer. Heed Dylan’s words:

“Your old road is
Rapidly agin’.
Please get out of the new one
If you can’t lend your hand
For the times they are a-changin’.”