I’d love to get into the head of Trey Laird, principal of Laird & Partners the company that redesigned the GAP logo.

In case you haven’t been keeping up [GAP: Crowdsourcing? Or Damage Control?] GAP introduced the new logo to a social networked hailstorm of icy criticism. The new “brand” features a Helvetica type solution featuring an uppercase “G” followed by a lowercase “a” and “p.” Given that it would be hard as Chinese algebra to trademark a Helvetica logotype, the designers have added a gradated blue square encroaching at the top right corner. Comments from the Great Big Dialogue out there… or, in this case – the Great Big Peanut Gallery, range from “looks like something a child designed” to “screams CHEAP.” I’d have to agree with the latter . To me it does  make GAP look like it has become a discount retailer.

I have a friend in the business who says, facetiously:

“There are two things everybody knows how to do: run a restaurant and do advertising.” I’d be tempted now to add a sarcastic third: design a logo.

Logos are subjective beasts. Very personal subjective beasts. And the original GAP logo has been around for a while. The longer logos hangout, the more we the consuming public believe that somehow we own them. So, the public outrage doesn’t surprise me. And GAP’s response, which I’m pretty sure is just clever spin control doesn’t anger me. What does get my dander up are the two questions burning habanero-like in my brain: [1] How much did GAP pay Laird & Partners for this work? and [2] How much work did Laird & Partners put into the project?

I’m becoming more and more convinced that there are a large number of highly successful design firms – doing BIG TIME branding work – who are little better than the tailors in Hans Christian Andersen‘s The Emperor’s New Clothes. Consider the 2009 Peter Arnell redesign of the Pepsi logo.

The design work alone by most accounts cost Pepsi Co. upwards of $1,000,000. Then they had to pay to slap it – in it’s various grinning incarnations – on everything from letterhead to beverage cans. When he set out to do the work, the self-esteemed Mr. Arnell convinced Pepsi Co. to cover his expenses while he spent months in China, Japan, etc. (The EAST) seeking inspiration. Arnell Group post-rationalized the work via a 20+ page document [Download: pepsi_gravitational_field] that drew upon everything from astrophysics to da Vinci in explaining the “Breathtaking” new design. Peruse it. See if it doesn’t cause this question to play pepper in your brain: “Does Peter Arnell actually eat all that gumbo he’s serving up? Really?” Moreover, how does all of this metaphysic0spirtualityismization have to do with a soft drink? The post-rationalization document is called Breathtaking Design Strategy. A truer title might have been What you Tell the Board of Directors When They Ask Why Your New Logo Cost Your Shareholders A Million Bucks.

We’ve done a fair amount of logo design. Take for example the logo we recently designed for Watts Realty, a fourth generation, family-owned real estate company here in Birmingham. We knew the new logo needed to accomplish a number of things: [1] It needed to do justice to a company that had been around for about as long as Birmingham, Alabama. [2] It needed to express the essential nature of the Watts brand. (We led them through a brand disclosure workshop in order to gain an understanding of what that meant) [3] It needed to help people know what service it is that Watts offers. 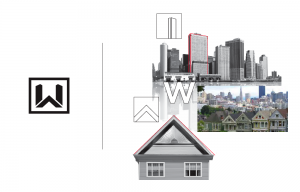 We spent many hours exploring marks and logotypes. The final solution was a well-considered mark that brought together the basic shape of the gable of a house in a conceptual foreground with the shapes of two towering office buildings framing it behind to create a strong, conservative “W.” The DNA of the Watts “W” is found in their core business: residential and commercial real estate management. They are a conservative, hard-working, no-nonsense company. The logo fits.

The Watts logo is smart, considerate work. The  operative word in the previous sentence is “WORK.” This was a final solution, arrived at after a great deal of exploration and thought. We had to go down a lot of conceptual rabbit holes to get there. It was not a shot-from-the-hip solution with a clever post-rationalization.

We charged Watts for the work we did. A fair price. We did not, mind you, charge upwards of $1,000,000. Heck, we probably wouldn’t have charged Pepsi that much either.

So, that leaves me in this mental space wondering… do the Pepsis and GAPs of the world know what ought to go into the design of a smart logo? Do they have an understanding and respect for the process that should be employed in brandwork? Or are they wandering, hoodwinked and naked through the crowd, waiting for somebody – who doesn’t know any better than to speak – to stand up and call them out?

Hey, GAP, hey Pepsi Co, I’ll call you out: if Cayenne is around the next time either of you decide to “rebrand” yourselves, give us a call. We’d love to show you how absolutely fine you can look when the  work gets done.

If you found this entry interesting, check out A Primer in the Subtleties of Logo Design 7/9/10
Share:
Next Post: How important are online reviews?
×