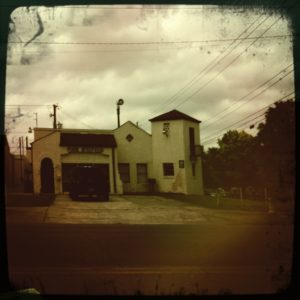 You can’t read anything marketing or advertising related these days without hearing about “social media.” As an owner of an advertising agency, I’ve been trying to get my head around it. First, what is happening in social networking is not “media.”

Media is traditionally how companies and products talk TO US. Social networking – Facebook, Twitter, blogs, etc. – is how we talk WITH EACH OTHER.

For most people this is no revelation. But I did have an experience recently that brought it home to me in spades.

On May 6th I read a blog by Glenny Brock on Kyle Whitmire’s new blog site, Second Front regarding Walgreens’ plans to build a new pharmacy at the corner of Clairmont Avenue and 32nd street, diagonally across from Highland Golf Course. The plans would require the demolition of the old #22 Fire Station Bogue’s Restaurant, Clairmont Auto Service, and Palmer and Lawrence. It was the first I’d heard of it.

I grew up in Forest Park. Used to ride my Schwinn Stingray down to Mr. Charlie’s grocery store where Maralyn Wilson Gallery is now. I bought Zots and Milk Duds at Bledsoe’s Pharmacy from the pharmacist, Dr. Whitten (on the corner where Zoe’s consignment shop is now). Bogue’s was where we celebrated small victories like good grades, and I toured the Old #22 with my kindergarten class from Avondale. So, when I read Glenny’s blog, I felt steam shooting out of my ears. They were destroying essential pieces of the character of my neighborhood in order to build a Walgreens? And on a corner where I could hit an existing CVS pharmacy with a solidly struck 7 iron??! Fuhgedaboudit.

In a moment of pique, I set up a page on Facebook entitled TELL WALGREENS TO FIND ANOTHER CORNER. I really had no expectations. I was just mad. I suppose I figured a dozen or so middle-aged folks like me who grew up in that neighborhood would rage against the machine, the pharmacy would be built anyway, and we would – while angry – feel good and self-righteous about having at least made a little noise. Not with a whimper – with a bang, dadgummit.

By about May 10th – four days later – the group had almost a thousand members and we were mobilizing to fight the plan. Wow. I was and still am stunned. So, THIS was what social networking was about! Since then, we’ve discovered that Walgreens has at some point agreed not to destroy buildings on the National Historic Register (which Old #22 is) in order to erect a new store. Walgreens is making backing up noises. A larger group has formed called “I Believe in Birmingham,” neighbors all, committed to preserving the good things about this city. And I got the primer on social networking. Here’s what I learned:

It’s not too late in my life to be optimistic about Birmingham.